Some People Don’t Have to Search for Their Inner Child

Being a Kid at any Age

I will be 34 years old later this month.  Perception of that age lies solely in the beholder as I am still a spring chicken to many and old man river to others.  I don’t have any issue with getting older and have been sporting that distinguished salt and pepper look for close to a decade now.  One of the reasons I don’t worry about getting older is because by now I have realized that there is a part of me that remains a perpetual child.  I do my fair share of grownup stuff like pay bills and taxes and schedule parent teacher conferences but even in a deep-sea of responsibility I cannot escape certain Peter Pan type tendencies.  I don’t do these things as a concerted effort to “stay young at heart” but I know that they probably help.  Here are some of the ways my inner child escapes no matter how old I get.

I could go on and on because to be honest I still probably do more kid things than grown up things but I will start the list with these and let you add your tips on staying young and feeding your inner kiddo.  I once had a dream I was licking frosting off of the mixing spoon when I heard the ice cream truck coming down the street, I looked at my wife and she said “race ya” and it was totally sweet.

How do you keep from growing up? 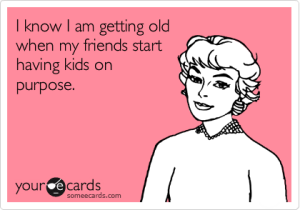 Man, I am getting old.  I know this because after working in the yard all day yesterday it hurts to type.  Yeah you read that right, my hands are sore.  As much as I may be a perpetual kid inside, there is no mistaking the fact that the new car smell has worn off and some of the features of this thing don’t work like they used to.  I often joke about the 20-year-old me shaking his head in disappointment if he heard some of the things I say or think today.  For example, I now place real value on something called a good night’s sleep.  There is no escaping it, somewhere inside of me is a cardigan sweater, the faint smell of Ben Gay and the desire to cut out things from the newspaper.  I hold that person at bay the best I can but here are some of the things that remind me that I am no spring chicken any more.

Sadly, I can probably fill this list out faster than the first one.  What are some things that remind you that you are getting older?  Realizing it would probably be a good idea to invest in a pair of work gloves is totally weak.