Don’t Step on the Magic 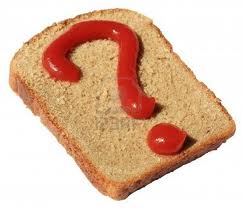 Because why not ketchup.
Stock Photo

Sometimes you have to give in to originality. You need to stop letting your daily decisions be regimented by social norms. Sometimes the only consequence of saying yes is your kid’s snaggle-toothed smile.

What I’m trying to say here is that I just put a turkey and ketchup sandwich into a school lunch. That’s right, I pack lunches. I also get daily lunch reviews that occasionally could make the harshest New York Times food critic cringe at times. I am still waiting for my Zagat rating though.  My initial reaction to this request was saying no. I mean ketchup on a sandwich is weird, Subway has 37 different condiments you can put on a sandwich and ketchup is not one of them. I don’t want my kid to be known as the ketchup sandwich girl.

Then I thought about it for a bit and wondered who made me the boss of what tastes good to my first grader.  Once upon a time I was a kid too and I am sure I was into some stuff that was weird.  I’m sure I got told no a few times to my suggestions of strange ideas and eventually put those ideas to rest and got normal.  I’m not suggesting that this was completely my idea but had I stuck with some of my outside the norm ideas we probably wouldn’t have had to wait this long to be able to buy containers of dehydrated cereal marshmallows that we are now free to enjoy on everything from Rice Crispies to spaghetti.

The world is going to do a fine job of stepping on the innocent magic a child is born with.  Over time a part of their creativity will get broken and pushed aside as they get normal and get accepted instead of getting fun and getting crazy.  Luckily a ketchup sandwich doesn’t really have any negative side effects and saying yes was easy.  The rest of the day though, I thought about how easy it would have been to just say no and step on a little bit of her magic without even realizing it.  I’m not suggesting I need a medal or anything.  A trophy maybe but not like with a big ceremony and a marching band and having to give some inspirational tear jerking speech while I accept a key to the city and a free Subway sandwiches for life card.

It isn’t like making a ketchup sandwich made her day that much more awesome or not making it would have crushed her but the situation did offer me a chance to reflect on how fast life can kick the childhood magic right out of their hands.  I’d like to try and keep it around a bit longer, I mean who knows what kind of amazing ideas could be floating around in her head afraid to come out because they may be weird.

Didn’t We Just Do that Whole Cicada Thing?

They should have given this car better handling considering all the ladies I had to dodge trying to get at me and my sweet ride.
Photo from cardomain.com

Ever have a memory that seems like it occurred pretty recently and then realize it was 10 or 20 years ago?  Man, that is like age kicking you right in the breadbasket (when I was a kid, I used to watch wrestling and “bread basket” was what they called that part of a male that rests below the belt and is very sensitive to pain.)

Last night while I was wondering when David Letterman stopped being funny he made some joke about the pending Cicada Apocalypse on the east coast. I looked at my wife and asked how this could be news when it just happened like last year?  Only it didn’t happen last year, it happened 17 years ago.  That’s right, 1996 was the last time the 17 year Cicadas took over both the east coast and the monologues of used to be funny late night talk show hosts.

17 years ago I was popping a Spin Doctors CD into my disc-man and putting a tape with a cord connected to it into my in dash tape deck, hoping not to drive over too many bumps because we all knew that anti-skip technology was mostly hollow promises and nothing is worse than being right in the middle of belting out “If you want to buy me flowers” and your music screech to a halt.

How could that much time have passed so quickly?  How have I been alive long enough to remember the great 17 year cicada outbreak of ’96?  Which, if I recall correctly, did not in any way live up to the hype so I am pretty skeptical of the upcoming reunion tour.  Life has a way of sneaking by and tricking us sometimes. Sure, I realize that I have had 17 years of life experience since the last cicada show-down and I’m happy I’m not still driving a faded blue Chevrolet Cavalier with a leaky sunroof.

Just like flipping through the pages of a calendar and thinking Christmas will be here soon because, how long can it possibly take to live 6 pages, time can seem equally as fast when you look back at things that feel like they just happened and then realize it was long enough ago that you still had a bowl cut.  I’m not sad about getting older and I am having a good time filling each year with memories just as sweet as that Spin Doctors CD.  Sometimes though, having time roundhouse you from out of nowhere with how old you are can be completely weak.

I am a husband and a dad of two little girls. I am a lone Y chromosome and am already planning my escape strategy to deal with the estrogen flood that is on its way. People say there is a lot of joy to be found in the simple things and I have found they can provide a healthy dose of anti-awesome as well. I am, in general, a pretty optimistic guy and needed a bit of a creative outlet; so here it is. Thanks for stopping by. END_OF_DOCUMENT_TOKEN_TO_BE_REPLACED
This entry was posted on Friday, May 10th, 2013 at 11:21 am and tagged with 1996, aging, award, Chevrolet, childhood, Cicadas, discman, dreams, family, humor, ketchup, Letterman, magic, marching band, memories, parents, sandwiches, Sony, Spin Doctors, subway, time and posted in Uncategorized. You can follow any responses to this entry through the RSS 2.0 feed.
« 72 Band-Aids and Plenty of Apple Juice
Happy Mother’s Day, honey! Sorry about the kitchen. »

12 responses to “Don’t Step on the Magic”