If Time is Cyclical, at What Point does Late Become Early? (or: I wish I had posted this before Mothers Day)

Say Hello to Your Mother for Me 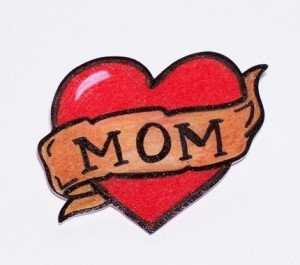 It would have been neat if I had put together some great touching blog post that would have made my wife and mom tear up and exclaim that my words were more precious to them than any gift they had ever received.  I guess in a perfect world those heartfelt words of adoration would have also populated paper and screen before Mother’s Day was over.  To be honest though, I was lucky that I wasn’t asking the clerk at 7-11 if they carried greeting cards on Saturday night.

What I would have written though, if I hadn’t spent 25 minutes Saturday night looking for scissors and scotch tape (because she is the only one that knows where we keep that stuff ) would have been a simple thank you.

I would have thanked the moms for rescuing their kids from dripping banana splits even if it did mean having to take her clothes off in the garage (and not in a good way).  I would have thanked moms for notes in school lunches and clean rooms when we got back from summer camp.  I would have also thanked them for remembering to get extra napkins and being the one that signs permission slips and makes sure our kid doesn’t show up at school dressed for pajama day when it is really hat day.

I try to do my fair share to create a solid foundation for our family but let’s be honest, if we are going for a house metaphor, mom is obviously the nails.  Mom’s are the heart, moms are the love.

I would also thank the moms for the prayers and the worries.  I didn’t see it as much as a kid because I was too busy being the source of said prayers and worries but I see it now.  That stuff matters, it matters a lot.

I would tell moms that while we seem pretty good at taking for granted all of the behind the scenes stuff they take care of, we know there is a lot and we are grateful that they are always behind us picking up what slipped from our carry and reminding us to watch our step.

I don’t know if it is the hardest job in the world but I do know that it is the most important.  Yep, if I had made the time, I would have written those things and then I would have also told them that I loved them.  I would thank them for letting me live wrapped up in their love, and offer mine in return.

I should have written those things and a bunch of other things to tell moms how special they are.  I would have also thanked moms for staying and waiting even when I was running late.  Even if it was a whole day late.

This blog thing I started a few months ago wouldn’t be very complete if I missed the chance to mention that moms are totally sweet.

(One more, I would have also thanked them for suggesting I start writing a blog and then reading and laughing and telling me good job in a way that only a wife/mom can do)

Breakfast in Bed with a Side Order of Terror

It really is a cute idea and I can remember being excited as a kid helping dad and sister make breakfast in bed while mom pretended she didn’t hear us dropping stuff and fighting in order to keep the surprise alive.

Lets be honest though, I think mothers and fathers can agree that breakfast in bed is simply way more trouble than it is worth.  Especially since you can now google image a luxurious Eggs Benedict with fresh-cut fruit and steaming hot coffee and paste it right into your Facebook status.  (At least I assume doing something like that would be easy.)  Breakfast in bed means a couple of things.  First off, mom or dad is a prisoner in the bedroom until the big reveal.  Also, nobody ever writes: congratulations on getting to change the sheets tonight before bed because of all the crumbs and spills, on the inside of a card.  Lastly, kids aren’t good at cooking so you let them help with the creative stuff like cards and flowers while you oversee the mechanics of toast burning.

I do love the Americana of the whole thing though, and the big reveal is certainly fun.  Sometimes though, even in your best dad effort to create a meal and presentation worthy of Pinterest with fresh-cut flowers from the backyard and everything, you don’t notice the spider.  Yes, that happened.   That’s right, the flowers came from outside.  Guess what also lives outside?  Ding Ding, spiders!  Spiders give my wife a major case of the heebie jeebies, so you can only imagine how overjoyed she was to make her discovery while she was holding a cup of hot coffee and her legs were pinned down under a tray of breakfast complete with crystal vase full of flowers and water.  Fun times right there.

She may have done a good job pretending she had no idea what we were up to but in the end we got to see the difference between fake surprise and real surprise.